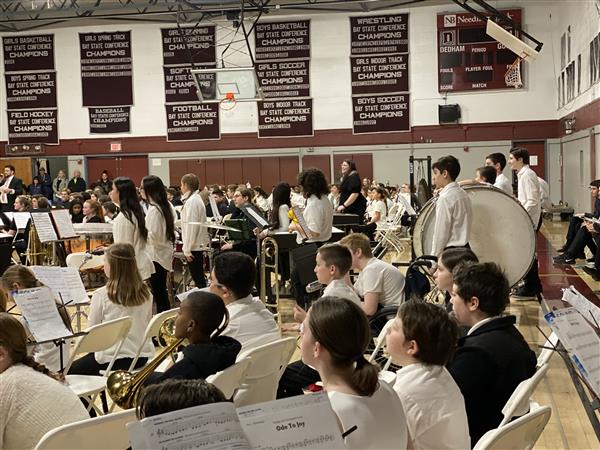 On Wednesday, February 5th, over 300 students from Dedham Public Schools took to the stage for an all-town instrumental concert.   Dedham students from 4th through 12th grade performed together showcasing the incredible musical talent across all age groups. The concert is the first performance for over 160 Elementary students who began taking instrumental music classes this year during the school day.

The audience was treated to musical performances by the 4th grade band, 5th grade band, and a collective performance of “Hot Cross Buns” by all Elementary musicians.  Performances by the 6th, 7th and 8th grade Dedham Middle School bands, the Dedham High School and Middle School orchestra and the Dedham High School band showcased the rising musical talents and dedication of the students.   In the spirit of celebrating music from the whole town, the concert also featured a performance by the Dedham Community Band. The evening concluded with a finale performance of Beethoven’s “Ode to Joy” featuring all performers, ranging from ages 9 - 73.

“The all town concert is a wonderful way to bring all our instrumental student musicians together and celebrate the resurgence and support of the fine arts in Dedham schools,” noted Eytan Wurman, Dedham Public Schools Director of Fine and Performing Arts.  “Learning an instrument and learning how to perform together as an ensemble is more than just about the music. Students are learning how to work together, to persevere and to express themselves in new ways.”

Dedham Public Schools this year introduced in-school, instrumental music classes for all Elementary students in 4th and 5th grade.  The new program is part of the District’s focus on expanding and rededicating efforts towards Fine and Performing Arts in the schools. At the Middle School and High School Dedham students are gaining increased visibility and recognition at the State level, with four High School students performing in the MMEA Eastern District Senior Festival in January, and four additional students who were just this week accepted to perform in the upcoming Junior Festival in March.