Congratulations to our Award Winners!

Dedham Public Schools marked the return of a new school year by honoring three of it’s educators with annual awards during a Return to School welcome event on Wednesday morning.   The annual awards are given in honor of past Dedham educators and staff who exhibit exemplary spirit and dedication to the schools and the students of Dedham.  Congratulations to the three award winners - Caroline Roy, DHS Chemistry Teacher;  Steve Traister, Dedham Athletic Director; and Cindy McGrann, DHS Guidance Counselor.

Caroline Roy, a DHS chemistry teacher, was awarded the Dee Meloski Award in recognition of her enthusiasm for teaching all students and her passion for the profession. The award, nominated and voted on by colleagues, is given to educators who are in their first 3 years of teaching.   Roy, who was a first year teacher last year, was recognized for her ability to maintain connections with her students and their families despite the challenges created by the pandemic.  Her innovation and use of technology to help improve student learning, her efforts to reach out, call home, and create new opportunities for colleagues to engage with scientists over Zoom, were all called out in her nomination for the award. 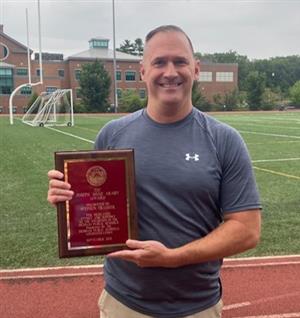 Steve Traister, Dedham Public School’s Athletic Director, was honored with the Shad Araby Award, given in recognition of a member of the DPS support staff whose contributions to the school go beyond the call of duty.   The award is given in honor of lifelong Dedham resident and DPS custodian Shad Araby, who left a legacy of welcome, support and volunteering far beyond his official role.    Traister was chosen for this award by the Dedham Leadership Team in honor of his efforts over the past year and a half to ensure that meals were distributed to any Dedham family in need.  At the beginning of the pandemic, many families were unable to get to the free food distribution sites in-person for pick-up.   Traister volunteered to help and ultimately has delivered thousands of meals, personally delivering them to Dedham families in need. 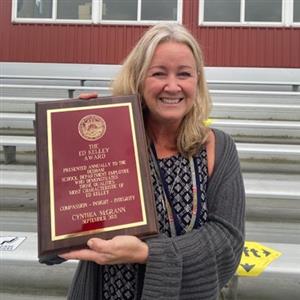 DHS guidance counselor, Cindy McGrann was honored with the Ed Kelley Award which celebrates staff members who go above and beyond.  Ed Kelley was a former DPS educator and administrator known for his dedication, compassion, insight and integrity.   McGrann was honored for her efforts not only in coordinating and championing Student of the Month recognitions, organizing SATs, or coordinating to provide students in need with gift cards and support over the holidays or during tough times.   McGrann was also called out for her role in helping deserving DHS students become involved in the “Dream Flight”